The biggest fish you catch with a rod in the Faroe Islands is the Porbeagle Shark. If you succeed you will have a lifetime memory of the fight. It is an intence experience the fight a 400 pund shark up close to the boat.

The price for a shark trip is 7000 dkk, and we fish with 4 rods. The season for sharks is from november to end of february, with a peek in november and february. We will devide the day between trolling and drifting with a chum bucket.

We have some frozen fish to start with, but we will try to catch some fresh saithe for bait as well. The fishing ground for sharks is both inshore and offshore. That means we can fish in fresh wind up to 5-6 on the beaufort scale, depending on the wind direction.

It´s also possible to fish for cod in some areas meanwhile you fish for sharks. 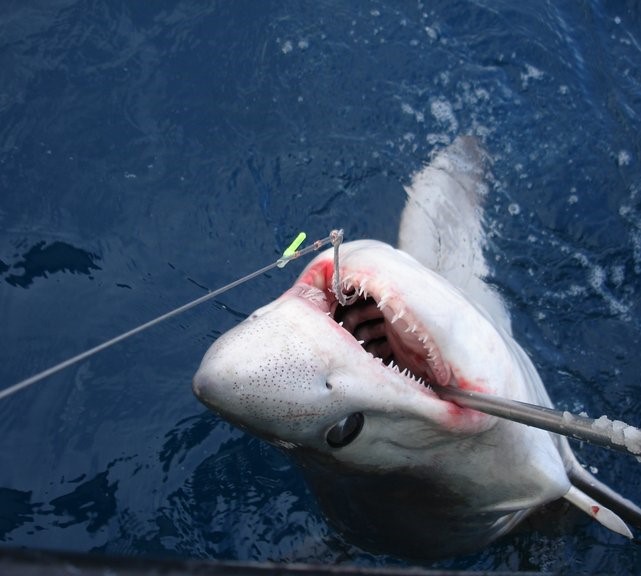 In winther time they come close to the shore to breed, and swim around areas with very strong tides. 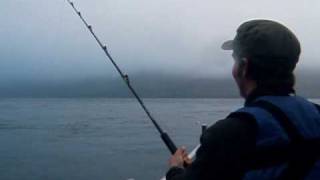 In the summer time they can be close to the shore as well, but only in short period. They travel in scoals and inhabit areas were there are huge scoals of small coalies. The size of the porbagleas are from 70 to 150 kg. 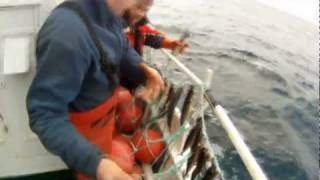 Blástein has done some research on porbeagles together with French marine biologist from Ifremer. and also Canadian marine biologists from Bedford institute of Oceanography. We have found out that some mature female travel from north of Norway to San sebastian in the bottom of the Biscaya bay. One porbeagle was tagged in November in Faroe, and was traced in closo to San Sebastian in late july. A few months later, in september it was found on the shelf in west of ireland.